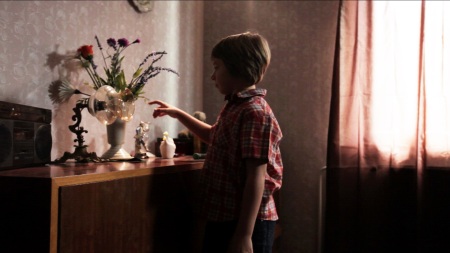 The first time I met Hassan Khan was in relation with a work-shop and exhibition I was engaged with in 2001-2002 which in the end happened in the Townhouse Gallery, downtown Cairo. I moved away from the exhibition itself and instead was editing a Cairo edition of SITE magazine from Egypt, and this was the first time I worked with Hassan as I asked him to make the spread for us. This is what it looked like in early 2004. 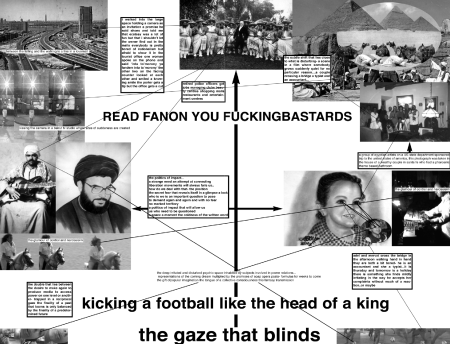 But before that, in 2003, we worked together at the Lydmar Hotel where he did a performance named tabla dubb where he made a musical performance and showed loads of moving images “VJ-ing” at a screen, like described on this blog already. Since then Hassan has been exhibiting all around the world. Twice and more. We haven’t been working together since (unless I forgot something…), but I have been following up on his developments closely and I always try to hook up with him any time I’m in Cairo, and he also visited me in Stockholm at one point.

For Momentum we had a very long discussion about what to show. We met in Berlin when he had a concert and we both found it really interesting that we both had been working with the word “Superstructure” for titles, Hassan for his music performances, and I for the exhibition essay (and for an exhibition a long time ago that never happened). There was a synchronicity there that we liked, a sort of meeting point. We both wanted to produce something new, and I had an idea about showing something with music, adding to the cacophony in my first room of the exhibition. See, I am childishly in love with his music in which hi incorporates elements of traditional Shaabi music into a more electronic sound, and also his video Jewel, 2010, below an excerpt.

Jewel (2010) opens with an evolutionary throwback to a monstrous deep-sea fish that inhabits a dark world until it suddenly fossilizes into a contemporary object. The video references a culture and its music that can be imagined as exotic, but the two men who dance in casual clothing and without apprehension, alter this response. Their activity appears at first distant and absurd, but as we bear witness to their suspended moment in time, we are also gradually embraced by the dance-inducing rhythm. Another rhythmic work, DOM TAK TAK DOM TAK (2005) is the transformation and extension of one audio detail into a large musical production, resulting in a new form of this popular music genre. Khan first restructured and recorded with percussionists a series of generic Shaabi rhythms, he then hired session musicians to improvise over the beats without listening to one another. Finally he mixed these separate interpretations to produce six hybrid musical scores. On entering the installation the visitor encounters an emotionally complex unraveling of musical styles in tension with the automated structure of the composition process and its transmission via a mechanical and cold assemblage of equipment.

But Hassan works with so many different things, he writes (well), he makes sculptures and much more. He had a huge retrospective solo-exhibition at SALT in Istanbul and on their website you can find a whole lot of things, and installation shots too, plus descriptions of many of his works (the description of Jewel and DOM TAK TAK DOM TAK, another work we considered for Momentum, above is taken from that website). At one point we had problems with our venues for Momentum. Or actually, on several points we had problems with our venues… there was an idea to make a new piece (silent) within the Momentum Kunsthall with residents from Moss, but somehow this didn’t really work out either unfortunately. Finally we decided to show a work with less sounds (of music), but with another sort of density that would and could shake you a bit. We decided to show the work produced for Manifesta 8 in Murcia, Spain, 2010 named MUSLIMGAUZE R.I.P. but for the first time by its own, and not vis a vis another work by Hassan like it had been exhibited like before. We also decided to show it on a large screen and in a room devoted to the work so that it could be experienced in full. The imagery rest on a little boy being bored, shot beautifully. If one scratch the surface there is so much more to be found. The video is ca 8 minutes long, you can watch a 30 sec clip from it below. 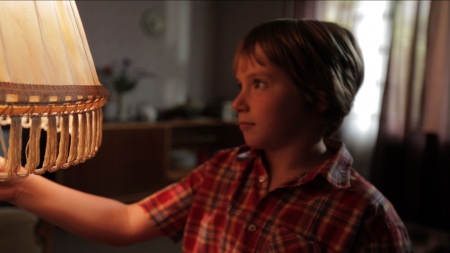 The multidisciplinary artist Hassan Khan works as an artist, musician and writer. Khan is probably just as widely known for his experimental music live acts, such as tabla dubb and Superstructure (the ammunition of the nation), both sets have
toured extensively world-wide, as have his flm-making and video. Language, as well as other structures or subtexts that permeate our lives, are central for his work. Working with both professional actors and/or amateurs in his videos, which sometimes are recorded only by using his mobile phone, sets a documentary tone to many of his flms. Most often it is still quite evident that there is an underlying directed structure, which is unfolding over time through a script or simply by improvising.
Khan will beis showing the flm Muslimgauze R.I.P, 2010 in Momentum. In the flm we encounter a young boy in a homely setting. He seems to be a bit bored and restless. He is doing all the aimless things a young boy would do when there is nothing else to do: he is looking out the window, fddling with things, looking out the window again etc. The flm, the soundtrack and the design of the
living room is developed carefully to somehow “inhabit” history in order to try to make it alive and present rather than something to be nostalgic about. An idea about a “present” moment was attempted to formulate through the actual flmic style, to always be in a slow glide, or companionship, with the boy in the apartment. The ambient sound is precisely constructed of diegetic sound that was dubbed on afterward. Without having to recourse to conventional narrative devices this can allow for an emotional bond to the boy. The title of the flm, Muslimgauze, can give us a key to the flm about the boy. Muslimgauze was the name of a music project during the 80s by the British experimental musician Bryn
Jones who was particularly infuenced by the Israeli-Palestinian confict, and Khan’s flm is a hommage to Bryn.
The setting is in Manchester in 1982, in an imaginative apartment where Bryn Jones could have been living and making his music. A starting point for his dedication was the Israeli invasion of Lebanon 1982, which led him to an outspoken support of the Palestinian liberation cause, and a critique against Western interest in natural resources as a root to conficts. Jones released many
albums under the Muslimgauze name which is a play on the word muslin, a type of gauze, and the word Muslim. His exoticizing music style that incorporated oriental rhythms had a wide impact in electronica, industrial genres and noise music, and made Jones an important and well known name in these circuits. Jones was heavily criticized for his point of view on the grounds that he never visited the Middle East, and he lived in the same house in Manchester until his death 1999. Can one take a political stand from an outside perspective? Jones was certainly convinced one could. It is also possible to read his position as a reaction to the England of  Thatcher, who held an iron fst on the economy and the social life, and that he was in fact politically speaking about Manchester. 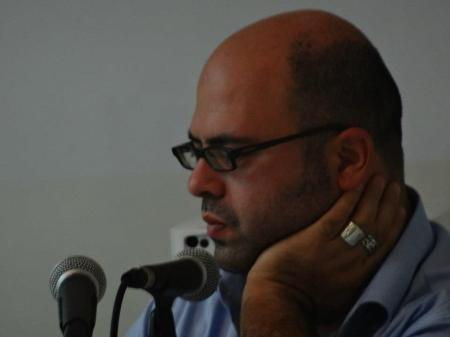 Hassan Khan in a picture stolen from his facebook-page